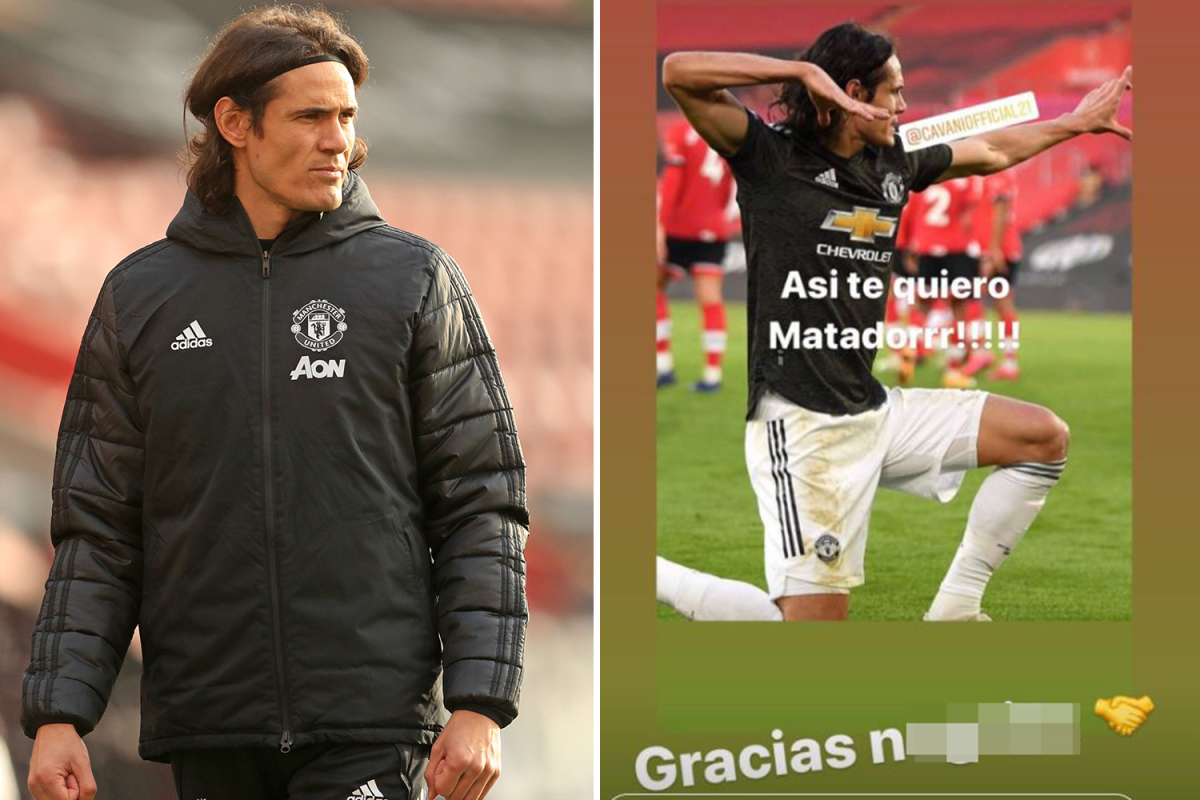 FA disciplinary beaks have launched a probe into the Instagram message after the Uruguayan scored twice to lead Manchester United to a 3-2 comeback win after they trailed 2-0 at Southampton.

Cavani’s reply to a fan on Instagram sparked a social media backlash – with some labelling his language as racist.

A fan posted ‘Asi te queiro Matador’ in Spanish, which translates to: “I love you, Matador!”

The striker, 33, later deleted the image from his Instagram story.

His reply looks certain to bring at least an FA charge and warning – and potentially a suspension of a ‘minimum’ three matches.

The FA launched a new crackdown on discriminatory conduct in August, following on the bans for social media comments issued to Manchester City’s Bernardo Silva and Tottenham’s Dele Alli.

Under the new guidelines, the FA must act where ‘discriminatory’ language has been used.

The FA rules, sent out to all clubs and players – via the PFA – state: “Where an offence is in writing only or via any communication device the absolute minimum match-based sanction in such cases will be three games.”

United refused to comment when contacted by SunSport, but it is understood they believe the comments were made in an affectionate context.

Old Trafford bosses pointed to the allegedly widespread use of the term in South America, although they confirmed Cavani would now be made aware that it might be misinterpreted.

That position, however, is unlikely to find favour with the FA who believe it is vital they punish all and any discriminatory language.

Wembley bosses began their probe when they were made aware of the comments and now have until close of business on Wednesday to decide whether to charge or contact Cavani to ask for his observations.

The FA would then have until next Monday to actually issue the charge, with a hearing then being scheduled before December 21, with a commission to determine any punishment needed.

But while Cavani did not join United until September, the clampdown applies to all players and United will fear the loss of their new strike star for the Christmas programme.

Suarez was fined £40,000 by The FA for his use of the word negrito, but later wrote in his autobiography that it has a different meaning in Spanish.

It translates in Spanish to ‘little black’ and is not typically used as a derogatory slur.

⚽ Read our latest sports and football news and weekend preview on omniblogng.com