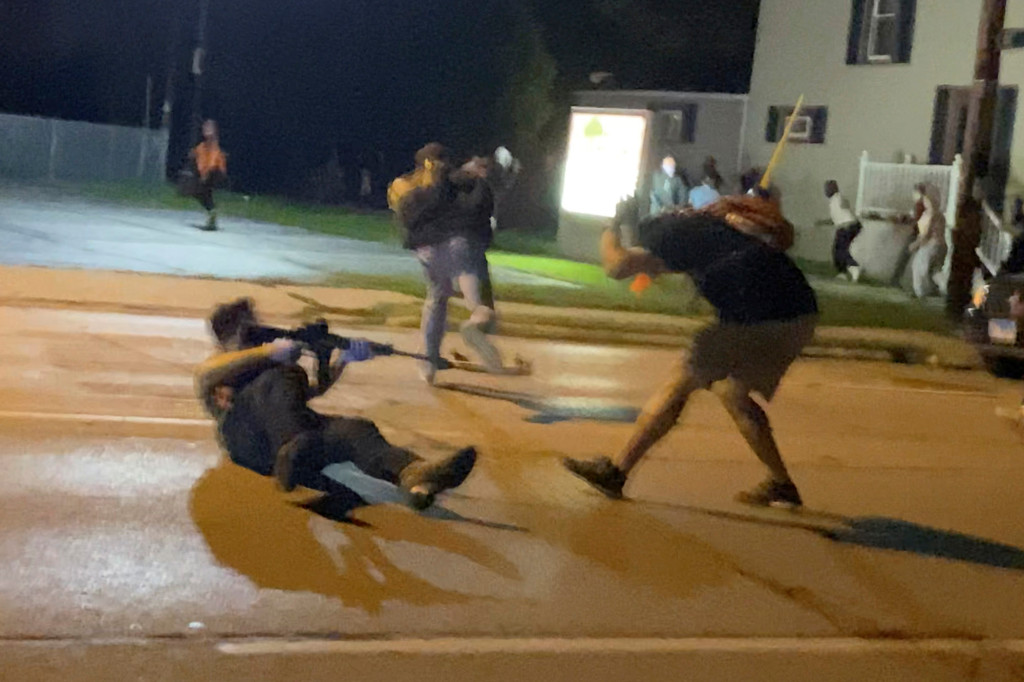 The protester who survived getting his bicep blasted off in the deadly shooting during riots in Kenosha, Wisconsin, claims he is a former paramedic who was only there to “help people” — but was packing heat himself that night.

Gaige Grosskreutz, 22, was caught in now-viral video getting shot in the right arm as he chased down 17-year-old suspected militia member Kyle Rittenhouse during violent protests on Aug. 25 which left two dead.

In his first interview since the bloodbath, Grosskreutz claimed to CNN that he was only ignoring the city’s state-of-emergency curfew to help as a medic — armed with a handgun.

“Absolutely. I believe in the right to bear arms,” Grosskreutz told the network of the weapon he was seen brandishing while tackling Rittenhouse, who also claimed to be a medic.

Confirming he has previous run-ins with police — without confirming details — Grosskreutz insisted he was “not a felon” or “Antifa terrorist organizer” and has had a concealed-carry license “for years.”

Anadolu Agency via Getty Images Up Next
Close

It’s the squawk of the Upper East Side. A female…

On the advice of his attorney, Grosskreutz would not discuss why he was chasing the suspect who was clearly carrying a high-powered rifle.

But the 22-year-old — who traveled 40 miles from Milwaukee, where he also regularly attended protests — said the horror of the shootings is “all I think about.”

“I’m in constant pain. Excruciating pain, pain that just doesn’t go away — both in my arm [and] in my heart,” he said.

Grosskreutz said he saved his own life by making a tourniquet.

“Had I not had my training and proper equipment … I might not be here doing this interview,” he told CNN of his “grievous wound.”

Despite images showing him clutching his handgun while rushing Rittenhouse, Grosskreutz insisted, “I never fired my weapon that night.

“I was there to help people, not hurt people,” he claimed.

Rittenhouse, who was allegedly part of a militia called to protect businesses being razed by rioting arsonists, is claiming the shootings were self-defense, his lawyer confirmed to CNN.

Grosskreutz –a member of a radical Black Lives Matter faction called the People’s Revolution — said that he has been inundated with death threats from those blaming protesters for the carnage that ended up with the deaths of Joseph Rosenbaum, 36, and Anthony Huber, 26.

“I’m not an Antifa terrorist organizer,” he insisted, referring to one of the main conspiracies about his involvement.

“I am a mid-20s-year-old male. I go to school. And yeah, I exercise my First Amendment right to peacefully protest.”

Rittenhouse is still in custody in his home state Illinois awaiting extradition to Wisconsin on six criminal counts, including first-degree intentional homicide and attempted homicide. A hearing is set for Sept. 25.

The teen’s attorney, John Pierce, told CNN, “This was classic self-defense and we are going to prove it.

“We will obtain justice for Kyle no matter how hard the fight or how long it takes.”

At least 2 persons dead as plane crashes in Los Angeles

Is this the end to Yahoo Yahoo? This 26-year-old wins tech prize, her innovation could stop internet fraud