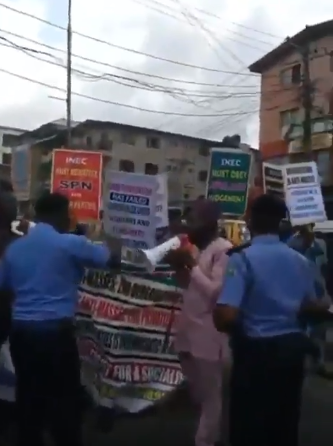 The police in Lagos have released four journalists and 14 protesters, who were arrested during a demonstration against the deregistration of political parties and increase in fuel price and electricity tariff.

The protest was organised by the Socialist Party of Nigeria.

The group is demanding a reversal in the action of government.

The President Muhammadu Buhari-led administration has become popular for clamping down on peaceful protesters and opposing voices in the country.

Some of the arrested protesters include Dagga Tolar, Chinedu Bosah, Hassan Taiwo Soweto, and 11 others.

They were all released unconditionally by the police on Thursday.

Abia NSCDC operative to face prosecution for killing a man