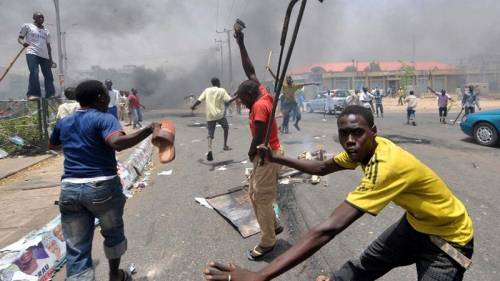 Fear of possible violence has gripped many residents of Ondo State ahead of Saturday’s local government election.

At least five separate attacks and clashes had been recorded in the state in the build-up to the election this weekend.

The violence has mostly been between members of the All Progressives Congress and members of opposition parties participating in the election.

The election is expected to hold in all 18 local council areas of the state.

Expressing fear of violence while speaking with SaharaRepoters on Thursday, a resident of Ondo, Mrs Tola Ibidapo, said crisis recorded during past elections may stop many people from coming out to vote.

She said, “The atmosphere is currently tensed and we have this fear that there might be crisis in the state because of the election.

“The participating political parties are ready for a showdown for the election and it is the electorates that will suffer it and we are scared already.”

Another resident, Mr Temitope Obagunwa, said he would stay indoors on Saturday, noting that the police, who suppose to be neutral in the exercise, has begun taking sides with a particular group.

He said, “I witnessed the violence that occurred a few days ago and was surprised that the police were just busy watching those boys (thugs) attacking people on the road and could not do anything.”

The police in the state have said it would deploy 5000 officers for the election in order to provide adequate security during the exercise.

Meanwhile, the Ondo State Independent Electoral Commission said it would on Friday begin the distribution of sensitive materials for the local government election.

ODIEC Chairman, Prof Yomi Dinakin, who made the disclosure at a briefing in Akure, said 10 political parties would now participate in the exercise.

Dinakin revealed that not less than 41 chairmanship and 425 councillorship candidates draw will contest in the election.

The Peoples Democratic Party had already boycotted the election on the grounds that the electoral umpire might not conduct a transparent poll.

He said, “We have also made provision for NCDC recommendations including face masks for our staff. We will enforce two-metre social distancing.”

SaharaReporters gathered that a total of 1,822,346 registered voters were expected to show up for Saturday’s exercise.