(VIDEO)Ngige Tackles Faleke During Probe, Says He Is At Same Level With His ‘Mentor’, Bola Tinubu
Advertisement 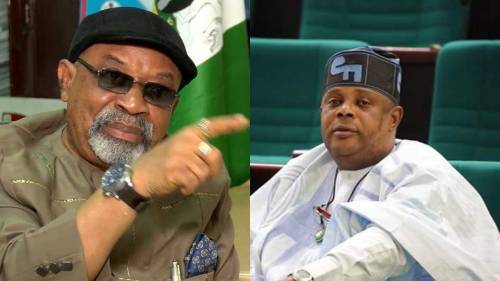 Chris Ngige, Minister of Labour and Employment, engaged in a war of words with James Faleke, who is representing Ikeja Federal Constituency at the House of Representatives.

Ngige had appeared before the House Ad Hoc Committee on the Arbitrary Breach of Presidential Directives on the suspension of top management and executive members of the Nigeria Social Insurance Trust Fund and other government agencies by the ministry on Tuesday when the incident occurred.

The minister after being questioned, said he was older than all members of the panel, adding that the only person close to him was Faleke.

Ngige likened himself to Bola Ahmed Tinubu, former governor of Lagos State and a stalwart of the All Progressives Congress.

Faleke while responding to Ngige accused the minister of not winning his election credibly as Tinubu did.

Angered by that statement, Ngige attacked Faleke, calling him a small Mushin boy from Kogi.

Responding, Ngige said, “No problem about that, just like you won your own in Kogi State very well. And you are now the deputy governor and governor of Kogi State.”

When Faleke asked the minister to respond to questions, he said, “I’m responding my friend, if you yab me, I yab you 10 times.