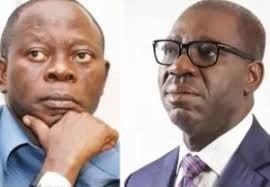 With the decision of the National Working Committee (NWC) of the ruling All Progressives Congress (APC), currently led by the National Chairman of the party and former governor of Edo State, Adams Oshiomhole, to adopt direct primary for the coming governorship primary in Edo State scheduled to hold on June 22, the hope of getting a second term ticket by the incumbent governor, Mr. Godwin Obaseki remains uncertain

Oshiomhole, who had been at loggerheads with Obaseki, had on Thursday, May 22, through the National Publicity Secretary of APC, Mr. Lanre Isa-Onilu, announced the decision of the NWC to adopt direct governorship primary in Edo, barely a month to the election. It is what the former national chairman of APC, Chief John Odigie-Oyegun, had warned against in one of his interactions with The Guardian, saying, “If the NWC eventually adopts a direct primary to decide who picks the party’s ticket for the governorship primary election Obaseki may likely not win, but that the development may also affect the chances of APC to retaining Edo State come September.”

Odigie-Oyegun’s position may have arisen as a result of the fate of the immediate past governor of Lagos State, Mr. Akinwunmi Ambode, who within the space of his first four years in office, had had cause to fall out of favour with the APC’s leadership in the state, and was denied a second term ticket through direct primary orchestrated by NWC on October 2, 2018. Political pundits in and outside Edo have also noted that: “as long as direct primary holds, Obaseki like Ambode, should forget having a second term on APC’s platform in the state.”

Odigie-Oyegun, therefore, said that given the widely known peculiarities of Edo State, noting, “if a consensus could not be built behind Obaseki, everything must be done to ensure that the persons in the leadership of the party at the centre who are part of the contrived crisis in Edo State must not even remotely be allowed to plan, participate or supervise the primary election. It is of critical importance that the primary is seen even by a blind man to be free and fair otherwise there could be political consequences. Allowing any member(s) of the national leaders who have been involved in the contrived crisis in Edo State would equate to making such person or person judges in their own case. This is contrary to the principle of natural justice and will be naturally resisted.”

It would be recalled that the Peoples Democratic Party’s (PDP) candidate in the 2016 governorship election, Pastor Osagie Ize-Iyamu, who recently defected to APC at the instance of Oshiomhole, has since been cleared to participate in the party’s governorship primary and he is believed to be the favourite candidate of the national chairman, who may have been tipped to wrestle power from Obaseki. The development is going to throw the ruling party into deeper murky waters since the loyalists of the incumbent have openly expressed displeasure and their decision to reject direct primary.

Obaseki’s spokesperson, Mr. Crusoe Osagie, does not mince words when he said APC’s NWC couldn’t impose on the state what method of governorship primary to be adopted for the ticket.

According to him, “The NEC is not the one that is responsible for picking the kind of primary that is used to determine the candidate of a party in a governorship election.”

However, a former minority whip of the House of Representatives, Hon. Samson Osagie has denied the existence of any presidential directive that Governor Obaseki should be given preference in the forthcoming governorship primaries in Edo State, noting that direct primary for electing who represents the party was a done deal.

He said, “I laughed at the naivety of these kids and grimaced at the sheer wickedness. This is nothing but a clear case of living in denial of the obvious reality on the ground in the politics of the APC primaries soon to be held. In a way, it is blackmail as well a calculated gimmick to give the diminishing following of the governor a false sense hope under an obvious condition of despair.”

Another stalwart of APC and Deputy National Chairman (North), Mr. Lawal Shuaibu, like Odigie-Oyegun, has also raised the alarm against what he described as Oshiomhole’s lawlessness, which according to him “would destroy APC.” He has warned that the party stood the risk of disintegration should the alleged arbitrariness of Oshiomhole be left unchecked. He said with the way Oshiomhole was running the party, it was obvious that lessons had yet to be learnt from the reversal of its electoral fortunes in Zamfara State.

In a statement he captioned ‘APC and its future, let us exercise caution’, the deputy national chairman said many did not take his concerns seriously when he asked Oshiomhole to step down and allow the party refocus and rebuild.

“APC which was founded on the principles of constitutionalism and the rule of law,” Shuaibu said, “is now subject to arbitrary administration without dictates of the law. The ruling party which ought to be a model for others in the upholding of the rule of law is now the nest of lawlessness.”

Shuaibu had, in a letter on May 28, 2019, warned Oshiomhole about the dangerous direction the party was headed and advised him to honourably resign to allow the party reposition itself for the task ahead. Shuaibu’s advice earned him a disputed suspension from the party’s National Working Committee.

In his latest letter, the deputy national chairman said, “Interestingly, all the issues I raised in my said letter have come to pass. Till date, the party, founded on the principles of constitutionalism and rule of law, is now subject of arbitrary administration without regard for the dictates of the law.

“To buttress my above assertion, the following few examples will drive the point home. By (Article 9.1(ii) and 9.4 (i) of the APC Constitution as amended, pages 6 and 8) every member will be registered at his ward when his or her name is entered in the register by the Ward Executives.

“My understanding of this provision is that power in the party is exercised bottom up! What this means is that every member of the party is answerable to his constituency. Being a party member, therefore, is a constitutional issue embedded in the membership register.”

On the inauguration of Waziri Bulama as the party’s National Secretary, Shuiabu said, “The APC Constitution in Article 20 (a) made it unambiguously clear that all party posts prescribed or implied by this constitution shall be filled by democratically conducted elections at the respective convention (in the case of NWC or NEC) or congress (in the case of executive committees at state, local government or ward levels) et al.

“There is nowhere in that same constitution where it was envisaged that an officer of the party could be appointed by the chairman nor the NWC.

“Not even NEC has the power to appoint any national officer of the party in any capacity. Let me ask this simple question: what is difficult in organising a midterm convention to elect the officers in line with the constitution so that even the officers will have confidence that they are elected like all other officers? The constitution of the party in Article 25 (A) (1) page 89 stipulates that there shall be a convention every two years.

“We had convention in 2018 and another one is due in 2020. What is the hurry in appointing an acting national secretary when we have the duly elected Deputy National Secretary who has been acting in that capacity since December 2018 in line with Article 14.4 of the constitution on page 58?”

In another reaction to the development in the party, a group that named itself Concerned Edo State APC Stakeholders, which comprises of Hon. Etiosa Ugiagbe, Chief Enakhare Odaro, Hon. Emmanuel Umweni, Mr. Akhere Odion, Engr. Jude Okojie, Chief Dr. Edionwele Ikpea, Mrs Odia Abubakar, Mr. Greg Onimisi and Dr. Omoruyi Graig in a letter addressed to President Muhammadu Buhari titled: ‘Oshiomhole’s Unforced Losses and Fate of APC in Edo 2020 Gubernatorial Election’ said they consider it necessary to intimate President Buhari, national leadership of the APC of the endless, unprovoked battles Oshiomhole has continued to wage against the Edo State chapter of the party.

The group expressed displeasure over the sorry pattern of the losses of the party under the leadership of Oshiomhole, saying it would amuse even the most taciturn individual and send the most critical of persons into extreme contemplation as to how these events could be correctly considered as mere happenstances.

The statement reads: “For instance, in Taraba State, the APC lost the governorship seat and could not even field a candidate because the person cleared for the position by the party under Oshiomhole’s leadership was indicted for forgery, a condition that could have been avoided were the necessary internal mechanisms explored to properly vet the candidates before they were confirmed to fly the party’s flag. The party also lost Bauchi and Oyo States due to the poor leadership displayed at the national secretariat of the party.

“Down South, what played out in Zamfara State repeated itself in Rivers State, where the inability of the party leadership to provide direction and harmoniously address the concerns of stakeholders set the state chapter of the party on the path of perdition, such that it could not also field candidates in the elections as a result of legal intrigues that surrounded the primary elections. Comrade Oshiomhole, it appeared, could not care less, even if the state was crucial to the party in Southern Nigeria among others.”

But loyalists of the national chairman have to strongly insist that it was wrong for Obaseki to contend against the fingers that fed him. They stressed that if not for Oshiomhole, the incumbent governor in Edo wouldn’t have been where he is. It was also observed that the issue between Oshiomhole and the incumbent centres on party interests, which the governor’s opponents said he failed to give priority as against the desires and wishes of his predecessor in office.