How can an asymptomatic person still spread the coronavirus?
Advertisement 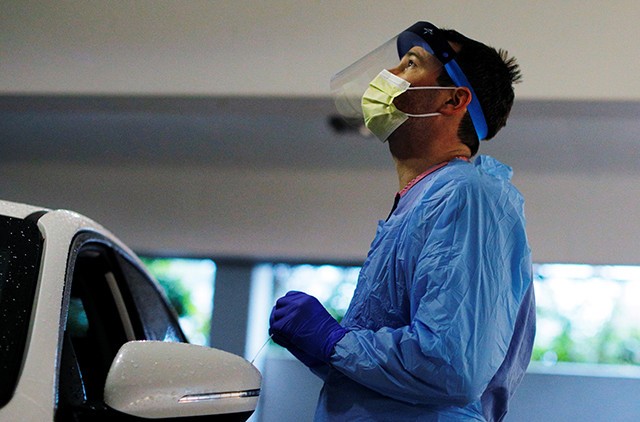 The explanation begins and ends with our immune system — our internal defense against foreign invaders. Those invaders are typically viruses and bacteria, but occasionally it’s the wood sliver off your patio deck, or the nickel in a piece of cheap jewelry.

Our immune system offers us two lines of defense: Innate and adaptive immunity. Innate immunity includes physical barriers like our skin, as well as a number of different kinds of white blood cells that are hostile to invaders. Innate immunity acts like a security team, providing a routine vigilance that can get an early jump on an infection.

Adaptive immunity is more like a SWAT team, composed of two types of white blood cells (with special weapons and tactics) called B-lymphocytes and T-lymphocytes. B-lymphocytes create antibodies, which are like those arrows you had as a kid with the pink rubber suction cup on the end. Except the rubber cup of an antibody is designed to stick to a very specific molecule found only on the invader (rather than the fridge, or your sister’s bare legs).

Otherwise, these antibodies might stick to our own cells, and that would be bad. Because when an antibody sticks to its target (either the outside of a bacteria or virus, or the outside of a cell that’s infected with a virus), it triggers a cascade of biochemical and immunological assaults. These attacks can blow a hole in the bacteria’s cell wall, an ultimately lethal injury. Alarm signals are broadcast that call in reserve unit white blood cells from other sites in the body (some have been sitting around waiting, and others will be newly manufactured for the event). T-lymphocytes begin physically attacking and demolishing anything tagged with an antibody.

It’s war, and as in the wars we humans wage, there is a lot of collateral damage. Instead of smoke, dust, debris and rubble, an infection war zone creates inflammation, swelling, pain, and lots of cellular debris. Our most intimate experience with this battleground is a bad cold. For a day or so, the nose is open but it’s red-hot and it hurts to inhale. Then, as the battle peaks, it gets plugged up until you can hardly breathe. Finally your body is ready to start clearing debris, and the “gunk” that you blow from your nose goes from green/yellow to white and then clear. You might feel recovered in terms of energy etc., and the virus might be gone, but you’ll be blowing your nose for days until the cleanup in aisle four is over.

Our SWAT-team adaptive immunity is also in charge of our “immunologic memory”: It keeps a log of prior offenders, so that we are “immune” to infections we have seen before. Vaccines allow our cells to create an immunological response and memory without actually having had the infection.

Sometimes our immune system gives us “partial immunity”: We recognize the invader, sort of, and have some antibodies at hand that will loosely attach to the virus. It’s enough to keep the infection under check, mild perhaps, until we can manufacture some more specific antibodies and polish the invader off.

So how can a person be infected enough to spread the virus, but not enough to feel ill? We tend to think that the sicker one appears, the more infectious one is, but that may not be the case with a novel virus like COVID-19, where no one’s immune system recognizes it. This allows the virus to enter the cells of our respiratory tract without being recognized for a while. It sets up shop, and immediately begins reproducing millions of new viruses that fall out into our respiratory tract. With no immunological fire alarms triggered, the not yet symptomatic host feels fine, but a simple throat-clearing cough (and we do this fairly often) or an unwitting sneeze (‘must have been some dust off the keyboard’) can send millions of highly infectious viral particles into a shared office space.

It’s hard to discover how (or if) an infection is being spread by asymptomatic-yet-infected individuals. First, even in a pandemic, most people aren’t infected, so you have to screen a lot of individuals. Second, when you do find a person who tests positive for COVID-19, the screening test only checks for traces of viral RNA — not fully intact, fully infective viral particles. It’s proof of infection, but it doesn’t indicate how infective one is. Particularly late in the recovery phase, respiratory secretions might still contain viral debris, but not active, intact viruses.

Although the data is limited, here are a few examples that suggest COVID-19 is both highly infective, and people can spread the disease before they feel ill.

When Germany flew 126 of its citizens home from Hubei on Feb. 1, only two of the passengers on the flight tested positive for COVID-19. They were both asymptomatic. In both cases, officials were able to grow (culture) the virus out of their respiratory tract. That suggests that these two were infective, even though they remained asymptomatic as they were monitored in isolation. [One ultimately had a slight redness of the throat and a faint rash].

A study by Chinese researchers looked at the first 425 confirmed COVID-19 cases in China. Early on, a large majority of infected persons reported they had either been to the ground-zero Huanan Seafood Market, or had direct contact with someone with a respiratory infection (often, a family member). Once the virus began making sustained, person-to-person transmission outside the seafood market, the majority of infected persons reported they had no exposure to the seafood market or contact with anyone who was ill. Despite being armed with information about the infection and with a heightened vigilance for avoiding symptomatic individuals, the infection still spread.

A Chinese businesswoman from Shanghai felt well as she traveled to Munich for two days of meetings in late January. While there, she had a few, very mild symptoms that she attributed to jet lag and business pressures. On the evening of her return to China she began to feel ill, and was confirmed to have COVID-19 five days after leaving Munich. At that point she notified the German company, who then referred her primary business contact there (Pt #1) to the health department. He tested positive for COVID, as did three more employees, one of whom had contact with the Chinese woman, but two of whom only had contact with Pt. #1 — who at that time was completely asymptomatic.

So why do most people get a mild case of COVID-19 (80% were reported as mild in China), and others more severe? There are a variety of explanations.

Influenza typically has a “U-shaped” mortality curve, where the very young and the very old have the highest mortality rates. We can thank our lucky stars that COVID-19 has a J-curve that leaves the young mostly untouched. There’s speculation that COVID-19 is sparing children and young adults because they might have partial immunity from having dealt with other less virulent corona strains that can cause colds. Or it may be that they don’t have a high number of the receptors in the lung – “ACE-2 receptors” — that COVID-19 uses to get a foothold.

For the 80% who work through their COVID-19 infection without too much difficulty, presumably their immune system gears up appropriately, clears the virus, and goes back to standby position. It’s not yet fully well understood, but sometimes it appears that our sickest infected patients suffer less from the primary infection than from an over-zealous immune response — aka “cytokine storm.” Particularly in respiratory infections, an overexuberant immune response can so damage the delicate tissue of the lungs that even a ventilator machine cannot improve breathing.

This brings us to an odd paradox: Our immune system can make us feel sick. Patients who are on medications to suppress their immune system — for example to keep their immune system from rejecting a donated kidney — are at increased risk of infection. When they do get infected, they often show few signs or symptoms until the virus or bacteria is beginning to overwhelm them.

The “flatten the curve” graphs that are going — forgive me — viral are an excellent visual dramatization of why we need to hunker down, spread out, and starve COVID-19 of any fresh fuel. Evidence that infected patients can spread the virus around before they even feel ill just supports that plan of action. If we can’t tell whom to avoid (based on symptoms), we should avoid everyone for a time. If we do, we may be able to turn a tsunami into a long slow swell. For an infection like this, our communal actions are the best — and only — treatment we have.