The Nigerian online betting industry in the time of coronavirus
Advertisement

Why I accused Uzodinma of infecting my wife with HIV.

Tacha celebrated her 24th birthday on Monday, December 23, 2019, and she got a surprise Mercedes Benz car gift on her special day.

Why wizkid and Co called out COZA Pastor, (video)

That first kiss, where did it happen

What is the craziest thing you did as a teenager? 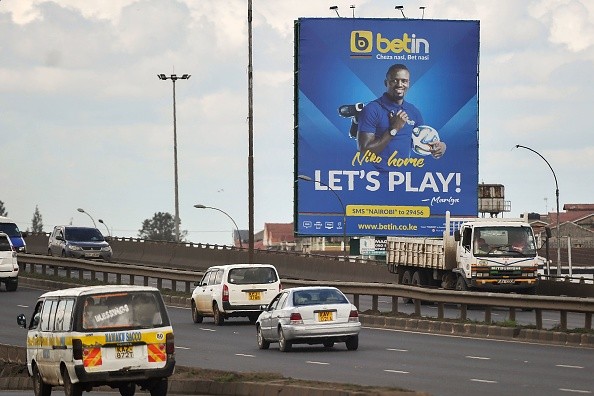 In Lagos, Nigeria, *Victor is one of many punters who is taking a break from online betting because of the Coronavirus pandemic.

The global coronavirus epidemic has led to the cancellation of many sporting events, and in turn, is affecting many online betting companies and their customers.

Victor tells me: “I’m taking a break, it’s not wise betting on events you have no familiarity with”.

Punters like Victor have two choices. Take a break from betting online on popular sports, which are now suspended or go down the unfamiliar road of betting on virtual sports.

I try to figure out what choices people are making at the third-floor space of one of Nigeria’s biggest online betting companies. It’s a big space and although it is 10:46 on a Tuesday morning, there are a handful of people at the counter manned by six cashiers.

Some twenty-odd people are watching a television screen showing virtual football, a computer simulation of a football league which punters can bet on.

While you can play these virtual games on your mobile phone, a lack of internet access makes people come to the shops.

Some customers book bets on their phones but walk into shops like this to place their bets. One punter tells me this is sometimes because they have trouble crediting their bet accounts.

Despite the activity, an anonymous source at one of Nigeria’s biggest online betting companies tells me that, compared to three weeks ago, this is a small crowd. The unintended irony is that one of the precautions health practitioners advice is to avoid large gatherings.

The source says that large crowds might be bad for the general public now, but it is good for online betting companies.

“Forget that it is early, this place gets full especially if there is Champions League this evening”. On March 13, the football governing body, UEFA announced the suspension of matches planned for March 17th.

Mid-June to early August are periods of low activity for punters, with many leagues and major tournaments on break.

“We’re usually prepared for the off-season but something like this has never happened before,” my source tells me.

“The big players in the industry will be able to survive the break, but the smaller companies are in a tough position”, he adds.

It has forced an off-season for these companies.

One thing is clear, even though some sports are still on, the suspension of bigger events like the Premier League, La Liga and the Champions League have forced an off season.

In off-seasons, these companies market their other offerings, knowing that activity will pick up again in three months.

Yet, he says that punters are not immediately turning to virtual sports. Many punters I spoke to said they preferred to take a break than to bet on virtual games.

Having worked at Bet9ja for five years, Ifedotun Ojobanikan understands the feeling of these punters.

“The average punter believes their knowledge of the sport they bet on is good enough to win them money. For virtual games, they believe it is luck.”

Virtual bets put you at the mercy of the algorithm

Victor is taking a break from online bets for now. He tells me:

“Virtual bets are a rabbit hole, it’s determined by code. With real bets, I can bank on Messi and Ronaldo saving the day.”

“But with virtual bets, you’re at the mercy of the algorithm. You lose your money in five minutes and then start scrambling to win it back. You’re not betting on real people with a pattern, it’s like playing a slot machine while trying to protect the outcomes”, he adds.

*Tumi is another punter who is still betting on teams in faraway Ukraine, where football matches are still on. He prefers to take his chances on these teams than play virtual games.

“It is easy to lose a lot of money with virtual games. I have seen what it does to people and I have a lot of stories”.

Unlike bets on real sports events, virtual sports are fast-paced and draw people in. Matches may take two hours to conclude in real-time, but you can play over 100 virtual games within the same time-frame.

Tumi says he has watched someone lose  ₦300,000 ($812) in a matter of hours. But other alternatives are lotteries, and many of Nigeria’s biggest lottos have a dedicated audience who rarely venture into online betting.

In the end, it is still early days and we can expect that despite the sceptical view towards virtual games, if sporting events remain suspended, it will test the resolve of punters.

But beyond the punters, online bet companies, despite the industry size, will feel the effect.

According to a report on Nigeria’s betting sector by Business Wire, the sports betting market is worth $2 billion. The sector will continue to grow, driven by the rapid spread of mobile phones.

Mobile penetration has driven online betting, although lotteries remain popular in Nigeria. There are at least 20 players in the online betting industry driving adoption in states like Lagos, Anambra and Ogun.

All players are concerned about the effects of the global pandemic in the short term, but Ifedotun sees it as an early summer break. “This will be like an off-season. Also, there are some sports going on, just not the major leagues. If you really want to bet, you will bet”.

If coronavirus is contained and sporting activities resume in the summer, it would mean that the effects would be minimal.

The danger will be if the pandemic lasts longer than three months, especially as many of the players in the sector were blindsided by the crisis. But in the meantime, it puts online betting companies and their customers at an interesting counterpoint.

While the aphorism is that you can never beat the house, punters want online bet companies to power their virtual sports with algorithms that feel beatable.

*Not his real name