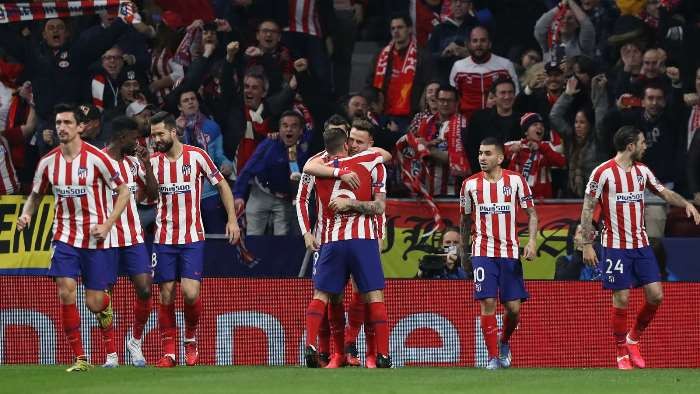 Liverpool must come from behind in their Champions League last-16 tie against Atletico Madrid after a 1-0 first-leg defeat in the Spanish capital on Tuesday, only their third defeat of the season.

Struggling domestically but always dangerous in Europe, Atletico got an early winner as Saul Niguez poked home from close range as the ball fell kindly to him from a corner in the fourth minute.

Liverpool dominated the ball but could not break through the stubborn Atletico defensive wall, with Mohamed Salah going close twice, and Jordan Henderson steering just wide in the second half.

Disappointingly, the European champions ended the game with no shots on target, and have a task on their hands in the second leg at Anfield in three weeks, at 8pm on March 11.

Returning to the scene of their Champions League win in June, where half of the Wanda Metropolitano was behind them, Liverpool this time struggled early on in a Madrid caldron.

An early Koke corner evaded everyone in the box before hitting the foot of Fabinho, then fortuitously falling to Saul to turn home from close range for the opener.

Liverpool reacted well and had all of the ball – 75 per cent in the first half, and in dangerous areas – but struggled to break down the Atletico defence. In a rare break, Alvaro Morata nearly capitalised on an equally rare Virgil van Dijk mishap, but saw his shot from an acute angle blocked by Alisson.

Liverpool had the ball in the net not long after as Jan Oblak’s miscued clearance fell to Salah 40 yards out; he instinctively passed forward to Roberto Firmino, using him as a wall before Salah rolled the ball into the net, only for the flag to go up for an offside against the Brazilian.

The visitors’ best chance then fell to Salah after good work from Sadio Mane and then Firmino, but the Egyptian’s goal-bound effort from 12 yards was superbly deflected clear by Felipe.

Jurgen Klopp made a change at half-time as Mane made way for Divock Origi, but it was more of the same as Salah headed wide unmarked from a Joe Gomez cross.

Atletico arguably had the best chance to score the second goal as Morata met a Renan Lodi’s centre in acres of space, only to slip as he went to shoot from 10 yards.

Henderson came within inches of an equaliser, steering a side-footed effort from 12 yards just wide, and there was concern late on as the Liverpool captain was then forced off with a hamstring injury.

Diego Simeone was the conductor for the home fans’ vocal support, overly animated on the touchline even by his standards, and it eventually saw them through without any damage on their own goal.

For Liverpool and Klopp, the feeling of defeat may be a rarity, but their dominance of this game will give them hope going into the second leg on Merseyside.