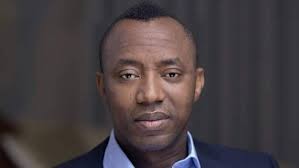 Hearing in the trial against Revolution now convener,Moyele Sowore would continue at the Federal High Court in Abuja on Wednesday, february 12,2020.

But the court did not sit on Tuesday because Justice Ojukwu was sitting outside division.

Sowore and co-defendant, Olawale Bakare, are facing trial  over charges of treasonable felony for organizing the Revolution Now protest on August 5, which the government saw as an attempt to disrupt peace in the country.

He was arrested on August 3, 2019 by the Department of State Services (DSS) and was in custody until December 5, 2019, despite court orders to be released on bail.

In November, the DSS had acknowledged receipt of the order but said the reason for still keeping him was that the appropriate sureties had not come for them.

But following an order of Justice Ojukwu on December 5, 2019 that the Sowore and Bakare be released under 24 hours and a cost of N100, 000 awarded against the DSS, they duo were released at about 5pm on the same day.

However, after his appearance in court the following day, December 6, 2019, he was rearrested by the DSS on fresh charges.

Attorney General of the Federation (AGF), Abubakar Malami, on December 13, 2019 took over  the prosecution of Sowore’s case from the DSS.

Sowore was released on bail on December 24, 2019 following a directive of the AGF.