‘None Of My Ex Have Been Able To Replace Me‘ – Tiwa Savage’s Ex-husband, Teebillz Brags

“I Have Never Received Bribe All My Life” – Suspended EFCC Boss, Magu

BBNaija: “One Pant Is Missing”- Vee Tells Neo While He Washes Her Underwear 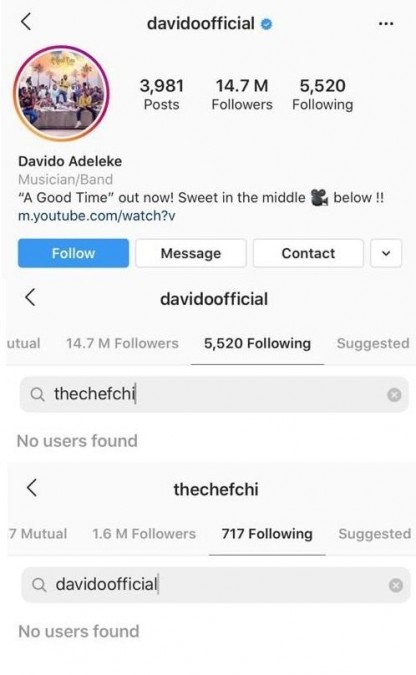 In the wake of speculations that Davido cheated on his fiancee and the third baby mama, Chioma, the once love birds have also brought their messy battle to the social media.

Many sources suggest that Chioma, also known as Mama Ifeanyi, has unfollowed her baby daddy on Instagram.

According to what is written on the blogger’s Instagram page, Davido now has 4th Baby Mama on the way and the lady got paid handsomely to keep shut about her pregnancy.

Then, another US based, Instagram influencer, Rilimillz also revealed that, the 4th babymama is one babe in Atlanta that Davido has been cheating on Chioma with. See screenshots below..

Mr Eazi, publicly said Joeboy has Become Wayward ever since he made $1Million

Oprah Winfrey reveals why she may never get married