WHY YOU NEED DIGITAL MARKETING 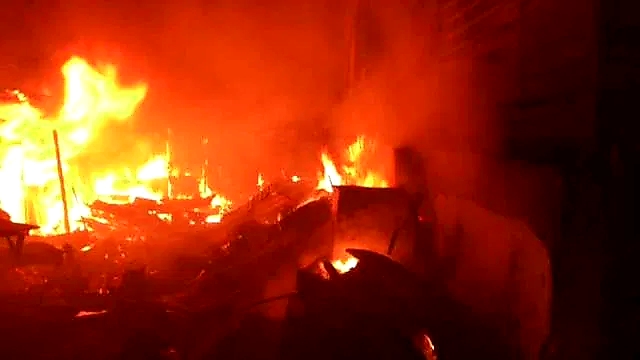 BENIN CITY – THE last three months have been a horrowing experience for many traders in Benin, Edo state following incidents of devastating fire outbreaks in three different markets resulting in loss of goods worth millions of naira.

Last Saturday, a mysterious night fire gutted the popular ‘Santana’ market along Sapele road. By the following morning many shops that sell food stuffs, cosmetics and baby care products had been razed with goods running into millions of naira destroyed. The cause of the fire has not been known.

One month before the Santana market incident, over 13 shops situated at Lagos street market were completely burnt to ashes by a strange fire outbreak. Warehouse of chemicals, baby care centre, assorted drinks shop, food and beverages shop were also affected. The owner of a chemicals warehouse in the market was said to have recently stocked his shop with goods worth over N9million.

In yet another incident, about 90 shops were burnt in the biggest spare market in the state situated in Uwelu, Ego local government area. The fire affected the areas where Mercedes Benz, Mazda, Ford and Toyota parts are sold.

In all three incidents, the state fire service failed to live up to the challenge of coming to the rescue of the traders and when help came from fire services run by other organizations, avoidable damage had been done.

The fire incident at Santana market caught many by surprise because torrential rain was still falling in Benin with flood around the market.

It was gathered that the fire started about 9:00pm when the traders had closed their stalls and retired home.

The inferno raged on till day break and reduced everything in the affected 50 shops to rubles.

The state fire fighters were nowhere in sight and the Nigerian Petroleum Development Company (NPDC) fire service that final came, could only prevent the fire from entering into neigbhouring residences.

One of the victims Mrs. Cecilia Awala who has been in the market for twenty years said she had never experience such incident in the market. A middle aged man who came to the market to resume his business oblivious of the fire incident, collapsed upon seeing the shops including his own reduced to rubbles.It was gathered that those who live close to the market were the ones who could save their good from being consumed in the fire.

In the case of the Lagos street market, one of the victims, Tawa Shittu told Saturday Vanguard that she was called in the midnight that there was fire in the market. “But I couldn’t come here till 5:00am. When I got there, everything had been burnt to ashes. We were told the fire started from the back of the building,” she said.

The fire which according to one of the market watchmen started at about past 12:00am from one of the shops was as a result of high power voltage.

He said the fire started when they brought the light that has been unstable for a very long time and that it was accompanied by a spark on the electric pole. “Not quite long, we were on routine patrol when we started to perceive the odour of melting rubber. It was in the process of trying to trace the source that we discovered it was from one of the fridges in her shop,” he said. He added that even security personnel within the area tried unsuccessfully to put out the fire.

Some of the affected traders at the Uwelu market were said to have collapsed when they visited the scene. Another trader in the market, was said to have almost ran into the raging fire but was stopped.

The fire which was said to have started at about 11:45pm lasted till 4:00am. Fire service men from the University of Benin and the Nigerian Army helped to put out the fire.

One of the victims, Daniel Okungbowa told Saturday Vanguard that he lost about N4million worth of goods to the fire and that he was still confused on how to start afresh.

Another victim, Festus Maxwell Osaeruoname, wondered how the fire spread rapidly when there was no power supply to the market.

He said, ”We are yet to ascertain what actually led to the fire. We could not remove anything from our shops. Many boys that just got freedom from their masters and open their shops are yet to repay the loans they took from various banks.”

Another affected trader, Lucky Uwabor from Igbanke, Orhionmwon local government area who deals on vehicle shafts said he has been operating there for over 22 years and that he lost goods worth N8m. “I have been here for more than 22 years. I was from here I got married. It was from this place I had my first son who is 16 years old now and I have been taking care of my family from this market. What I have lost to the fire is not less than N8 million. As at the time they called me and I ran here, fire had already entered my shop, the only thing left for me was to jump into the fire. I could not recover anything, all I have here now is iron and pieces of shaft.”

Chairman of Spare Parts Delears Association , Mr. Ibie Augustine, said the fire incident has compounded the low patronage they were initially witnessing due to bad roads to the market.

Augustine who hinted that four security guards hired by the traders were being questioned by the police, said he recieved an anonymous call that the market was on fire and when he called the security personnel on ground, he was told that it was somebody burning something in a nearby street.

He said, “When the security man told me somebody was burning something, I told him to check properly and he told me it was the line where my shop is located that was on fire.

“I called the Edo Fire Service but they did not come. The entire market would have been razed if fire men had not come from UNIBEN and the Nigerian Army.

“For now, we do not suspect any foul play but we have held meeting to appease those affected and stood any suicidal attempt.

We are appealing to the state government to rebuild the market because we are using loan from micro-finance bank.”

The state governor, Godwin Obaseki who visited the market promised to assist the traders in finding out the cause of the fire and rebuild it with fire proof installations.

He assured the traders of government’s support to get them back to business. The governor stated that a committee would be set-up to unravel the cause of the inferno.

He added, “I will hold a meeting with the Head, Edo Fire Service; sister agencies which helped in putting out the fire; members of the State Executive Council and officials of Egor LGA this afternoon and a team will be set up to investigate the fire outbreak.

“ The committee will be given a week to carry out the investigation on the cause of the fire, ascertain the number of traders whose goods were damaged and the monetary value of goods lost, which will enable the state government in providing assistance to the victims.”

But two months after the incident, the traders were yet to hear from the government. They recently took to the streets to protest the delay.

They expressed concern over alleged non challant attitude of the state government to their plight.

Their chairman, Ibie said “They promised us that a week will be enough for them to unravel what happened so that they will know what steps to take but this is the second month and up till now, nothing has been done. The worst thing is that there is no word coming from the authorities. This is why we said today we must come out because we are tired of being outside.”

When contacted, Special Adviser on Media and Communication Strategy to Obaseki Crusoe Osagie said a white paper on the incident has been received by the state government which is being processed and thereafter government will take necessary action.

He said that for the Santana market, government has assessed damages caused by the fire and has raised a committee of inquiry to unravel the immediate and remote cause of the inferno.